This Sunday I’m out with James Harvey. He worked on VICE, on the mash-up project Bartkira, he’s the author of Masterplasty and recently of the most hipster DC book, We Are Robin. I’ve been making my way through all of Frank Miller’s work since I started working for DC. For the most part, I admire the path his career took- he gained both a huge audience and complete creative freedom by working his way up through the established American comics industry in a traditional manner. He was able to appease hardcore comics fans while at the same time imprinting his work with an intensely personal vision. So I’ve been trying to see what I can learn from this man, and what lessons and warnings we can take from his career.

Frank is still working, but his health has declined sharply in the last 15 years, and his mental faculties appear to have followed suit. (I get the sense that this would be the eventual fate of the perpetually bourbon-swilling heroes of Sin City, too.) As his mind and body have deteriorated, so has his writing and art- his work has become increasingly dashed-off, with an ugly right-wing and misogynist streak running through it.

That’s why his book Ronin, which he did when he was about my age, was such a surprise to me. I spent most of this book saying, “FRANK MILLER did this?!”

Why did you choose Ronin?

Firstly, it’s plotted in a very intricate and clever way. Frank spends the entire book playing a game with the reader’s expectations that’s far more cunning and intelligent than I thought he was capable of. It’s a brilliant, cleverly constructed adventure, put together by a man who understands story. Wasn’t expecting that.

Second, it’s got at least one fully realised and multidimensional female character. Who is a fighter, a leader, and a partner, and who goes on a genuine emotional journey over the course of this book. There’s TWO brilliantly-written female leads if you count the HAL9000-like AI, Virgo. Frank has become something of a joke of late due to his reputation for writing every female character as a dumb slut or a prostitute or a deadly assassin or some combination of all three, so it’s crazy to see him not only doing the opposite of that, but doing it very well.

Third, this book is the work of someone who has an incredible mastery over his craft. The panel layouts and pacing are consistantly innovative throughout, and Lynn Varley’s colours complement them perfectly. Which brings me to this page.

Allright, why did you pick this particular page?

I was amazed at this sex scene from late on in the book. It has a real tenderness to it. There is sex in his later work, and while it can be sexy, it’s never so intimate as this is.

Frank usually conflates sex with violence, I’ve noticed. Usually someone has sex with someone they’re about to kill, or they’ll slug a person in the jaw that they’re about to have sex with, or someone will kill someone while they’re having sex. It happens so often in Frank’s work that I figured that was just how he was wired… that sex and violence were inextricably linked for him. That’s why this book was so surprising to me. The handling of sex in Ronin feels unusually mature, and executed with an uncharacteristic sensitivity. What happened to the guy who did this? Where did he go?

I guess, in art like in everything, there’s a time for doing things. Especially writers, I don’t honestly rember any GREAT works from the last part of anybody’s career.

In fact, many famous writers and artists continued to bloom right up until their final years. Nabokov is one- he wrote Lolita when he was in his 50’s and Pale Fire when he was 60-odd. Jack Kirby was 40-ish when he had his first successes with Stan Lee. Hayao Miyazaki was over 60 when he won his first academy award for Spirited Away, and is still showing us things we’ve never seen before, despite having retired about 6 times at this point.

I think Frank’s late style, such as it is, is pretty fascinating. It has a heartbeat and a pulse to it, and a seemingly innate sense of rhythm. Holy Terror has an ass-backwards view of Islam and looks like he was never less than five whiskies in when he drew any given page, but as a piece of dumb-ass pulp fiction it’s unreasonably entertaining in spite of that. I think there’s a lot to learn from the way Frank’s later work ticks along.  Holy Terror, or individual issues of Hell And Back. I think if you combined that sense of pacing with an actually good story, you’d really have something.

You never read anything of his before you DC gig? When you says ‘I didnt’ expecting THIS good’, you mean that you were thinking of  him in what ways?

Before I starting working for DC and delving into Frank’s work thoroughly, I knew about Sin City, Dark Knight, the usual stuff. Like most people, I thought of him as a gutsy, incredibly talented writer and artist who lacked compassion and intellect, and who’d mentally and physically deteriorated after 1999 or so. After reading Ronin, I have to revise that point of view. He’s more like a gutsy, incredibly talented writer and artist with compassion and intellect in spades, who mentally deteriorated after 1985 or so. It’s a huge shame.

So, what about the actual page you picked? Any technical aspect you would like to talk about? Like, what’s up with the fifth and sixth panels, that are the actually part of the same image?

Yeah, the divide between the fifth and sixth panels is really nice. I have to say I didn’t notice that until you pointed it out. Ronin’s full of tricks like that- single moments broken up into many moments using the panel dividers. I don’t know if Frank invented that or if he saw it in a European comic and brought it over. Like with all creative disciplines, it’s not about being the first to do something- it’s about being the first to do it well, and Frank does so many things well here. He manages to brilliantly synthesise a lot of lessons taken from Japanese and European comics in this book, about 20-years before a “post-manga” language of western comics was something we took for granted.

This is the culmination of a much longer sequence. Across the three pages or so this scene goes on for, the panels get smaller and the moments they depict get tinier, too – to the point where the last four frames are almost like animation keyframes. It lets us feel their heartbeat increasing, their absorption in the moment. The next page is one big image- just a kiss, tastefully depicted, but the fact that it follows these rapid, close panels gives it a power and impact. The page turn feels like a release. It’s a release for the characters too- you get the impression this has been built up for a while and when they kiss a weight is falling from them. It feels cathartic for us and for them.

I realize now that I mostly picked this page to talk about its place in a larger sequence rather than the page itself! But comics is a language of moments, and it’s hard to talk about one moment without talking it’s relationship to the moment before and the moment after.

Shall we talk about the colors of the page?

Sure. Frank and Lynn Varley work incredibly well as a team, and they give each other just enough space so their work sings and neither one drowns out the other. It’s a great partnership. Lynn does some incredibly bold work on this book. It would have been so easy for her to do some non-literal colour scheme on this page to heighten the emotion of the scene, and totally in keeping with the rest of the book- but here she just hangs back and lets the flesh tones do the work. It works, because it draws a stark contrast between the earthy, real thing that’s happening here and the electric greens, yellows and blues of the techno dystopia the book takes place in. It’s a smart choice in a book of smart choices. 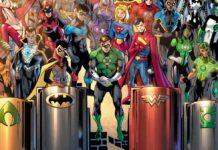 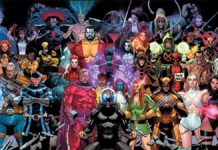 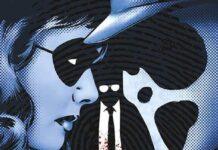 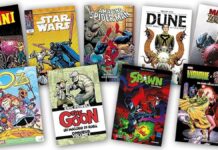 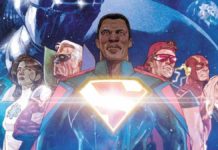 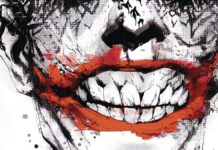