How did your collaboration with Kuš! started?

In 2013, my book Inverso was published in their mini-Kus collection, and I was an artist-in-residency in Riga. Since then I’ve continued to publish short stories regularly.

Do you feel like there is a sort of movement of western contemporary manga, and why?

On the professional level, not at all. We need more books of this kind before we can talk about a movement. On the indie level, this movement has existed in the Otaku community for ages. If you attend any Anime convention in a Western country, you’ll see plenty of manga publications! I’m not being ironical at all when I say this, it is biased to think these publications can’t be considered as Western manga. Those people are usually very organized, and have a strong sense of community, (especially on the internet, in websites such as Deviantart) which the more individualistic indie comics scene kind of lacks. Now, if your question is referring to non-professional artists who work outside of the Otaku communities, I don’t see a cohesive movement, but there’s indeed an aesthetic tendency, which as a short-cut I’ll call Neo-Japonisme (which includes not only comics, but also fashion, or music, such as Vaporwave), which rarely goes beyond a rather superficial use of manga visuals and japanese culture in general. The main difference between Otaku manga and Neo-Japonisme, is that while the Otaku manga usually works towards the complete elimination of any trace of Western elements (basically the goal is to “pass” as japanese, not only in their work, which sometimes reads right-to-left, but also in their choice of pen names, or even their physical appearence), Neo-Japonisme incorporates manga or japanese elements in a way which doesn’t intend to fuse with, or erradicate, Western elements, but to co-exist in harmony without having to let go of their respective identities. This makes lots of sense in Western liberal countries with multi-culturalist values. I’m politically inclined to a third approach, and in my opinion, those invited to participate in š! #25 are good examples of it.

How did you choose the artists?

In opposition to both Otakus who see Japanese manga as an ideal of artistic purity (very Right wing indeed), and multi-culturalist artists who conveniently “free-trade” with Manga just like Warhol used Campbell Soup cans, I wanted authors which exemplify what in Cultural Studies is denominated Transculturalism, that is, in our case, people whose work can’t and shouldn’t be considered non-manga anymore, but also not “true” manga, in the Otaku sense. Gaijin (“foreign”) Mangaka (such as the artists in š! #25), are not such for the country they were born in, but rather in a broader, philosophical and artistic sense: they don’t feel at home in their own bodies of work, therefore they’re are always in transition, always walking the thin line of “not this / not that” and “this and simultaneaously that”.

What kind of indications did you suggest to the artists, if there was any?

When and how did you discover Gekiga? At first your style didn’t have much to do with manga.

I discovered Gekiga as a reader, with the Spanish edition of Red Colored Elegy in 2008. Then came Yoshihiro Tatsumi. I started making comics professionally in 2009. I think my work was always very influenced by Yoshihiro Tatsumi, mostly its narrative resources ( the use of ellipsis, atmospheric versus plot-oriented), and the themes. But in the beginning the visual style was absolutely “repressed”, as I like to say. My drawings were what the rather patriarchal comics culture of my own country always hailed as both manly as well as “national”: high-contrast, large masses of black, roughness (the two most prominent authors in the history of Argentinean comics are Alberto Breccia and José Muñoz), in contrast to the foreign-looking, delicate, fine-lined, white-surfaced manga. In 2013, after finishing my book “Playground”, which was a good-bye letter to Art-Comics, I finally came out of the closet, a form of putting it for which I was critisised. The transition (another term my political adversaries don’t like me to use) was actually quite smooth, and all these first attempts at manga can be read in my book “Desolation.exe”. About this book, Portuguese critic Pedro Moura said: “It’s as if Berliac wore the skin of an gekiga artist in order to understand what kind narratives would result”. In line with the expression “to come out of the closet”, I prefer to think that rather than wearing the skin, I was merely trying on my own mother’s dresses, with the self-empowerement that implies.

How do you explain the current popularity of Gekiga in the western comics scene?

Now they’re getting published and before they were not, simple as that. If you want to dig deeper, I guess the publishers finally realized that since the late seventies, Western adults grew up with manga and anime, and we just needed a cultural approval from well-respected publishers, to re-unite with our childhood love without feeling embarassed about it. Put that together with the concept that publishers from liberal countries have of what a Graphic-Novel is supposed to be (basically realistic stories about the suffering of people from far away countries, to be enjoyed from the comfort of our sofas), and there you go: Gekiga provides us with both. Here lies another reason why I like to call my own work Gaijin-Gekiga: if Gekiga was the Japanese expression, in a dramatic comics form, of their own collective anxieties in times of hypercapitalism, then I can undoubtedly say that the main focus of my work is the very same one, only about my own place and time, of course. I have the impression that not many well-known cartoonists are really talking about what’s going on right here and now, on this side of the world, on a collective scale. In Graphic-Novels, all I see is either boring lectures about foreign or past war conflicts from an “objective”, Western point of view, or feel-good stories about individual self-improvement, and in the most successful cases, a combination of the two. These stories are just two different ways of patting our backs and telling ourselves how great we Westerners are. Gekiga was a beautiful, dignifying way to accept the crushing reality of post-war defeat. Western narratives of today, on the contrary, insist on that we’re on the winning side, even when our reality clearly points to the opposite (see Donald Trump). I’m not saying there’s dignity in being a loser, but in seeing reality for what it is. Drama without exaggeration. That is the essence of Gekiga.

Now that a few months has passed from the release of the Kus, can you say that the anthology also served as a bond between the artists of this possible new western manga scene?

Bonds among artists always exist, but maybe not explicitely. to the point not even we are aware of it. Many of the artists involved discovered each other’s work in that issue of š! As I said in another interview, it is not the artists’ task or responsablity to make that bond intelligible for the public, but the publishers’, gallerists’, and journalists’. As an author, I’m not too concerned about it. As a co-editor of š! #25, I certainly hope we provided a grain of sand to this cause.

Are there going to be any other books like this?

It’s funny you mention this, because as a matter of fact, a few days ago I got a rejection email from a famous European publisher about my book Sadbøi, on the basis that they don’t publish manga, but Graphic Novels instead. So, as you can see, apparently, in 2017, we’re still far from making those in position of making relevant cultural decisions (let me remind you that’s what being a publisher is actually about) understand that those kinds of distinctions are inherently absurd. Maybe they were too kind to say my book in particular is absolute shit, but actually I can deal with individual rejection much better than being left with the feeling that the rest of my colleagues in Kuš! #25, all of them exceptional artists, would face rejection based on how big their characters’ eyes are, or how pointy their hair is. If any open-minded publisher is reading this and would like to work together on a high-quality Gaijin Manga project of any kind, please don’t hesitate in contacting me and I will try to help. After all, the Kus Gaijin Mangaka special is almost sold out, three times faster than their non-manga issues. If you don’t trust in our style, please trust the numbers. Kuš! can’t and shouldn’t be the only one satisfying the readers demands when it comes to Gaijin manga!

What are you currently working on?

I recently finished my book Sadbøi, so now I’m working on getting it published in as many countries as possible. Same goes for my short-story collection Desolation.exe, which will be out in the USA in September this year. As for new comics, by the time this interview is out, my weekly comedy manga about food, Asian Store Junkies, should be already running on Vice magazine. 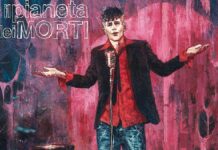 I 5 migliori fumetti pubblicati a settembre 2021 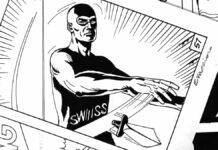 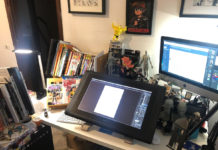 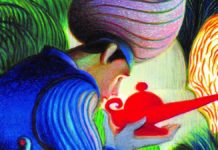 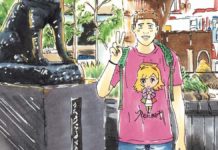 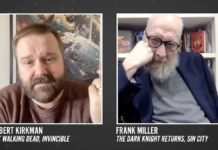