If you liked Guardian of the Galaxy, you should thank Andy Schmidt, former editor and writer at Marvel who helped create the new version of the group that later went on to become one of the funniest Marvel movie. Schmidt also worked on Civil War, New Avengers and Captain America, and on Star Trek and the revival of G.I. Joe (IDW Publishing). He later founded the Comics Experience school, dedicated to teaching comics writers and artists. So this is the very first page of Jack Kirby’s New Gods #1 from DC Comics, written and illustrated by Jack Kirby. I don’t think anything has ever resonated with me the way this page has—and on many different levels.

My hesitation to choose this page is that A) I feel like going to Kirby seems like an obvious choice and a cliché, and B) that it’s a splash page and there are so many great pages that make use of the juxtaposition of images, but this page has stuck with me like no other page of anything. And it has meant something different to me at different times in my life.

Why it’s so important for you?

What’s interesting to me about this page to me is how it always resonates with me. When I was young, maybe 10 years old or so when I first saw this page, I had no idea of the context surrounding it in real life, or in Kirby’s life or how it related to his previous work. Actually, I was completely unaware of the importance of Jack Kirby at all. I almost feel embarrassed to say that as a working comics professional today, but you have to learn sometime, right?

As a kid, starting a comic at what is clearly the end of an epic and ferocious war and telling me, the reader, that the apocalypse had essentially happened, was the most fascinating idea I’d ever encountered. And then to tell me that these old gods had died and wouldn’t be coming back…. what? That was crazy and exciting. I was immediately hooked into the story. Heck, at that point, I didn’t even need the visuals, that little bit of text had me. And I knew I was in for the long haul.

That page continued to carry importance because, in those days, back issues were hard to find. And I had to know what happened next. It took me months or probably even more than a year as a kid in St. Louis, Missouri to track down the remaining issues of New Gods, and when I finally did, that’s when the page took on its second meaning to me.

New Gods lasted all of 11 issues. Later, there would be a 12th issue and a stand alone graphic novel, both by Kirby, that would come along. But at the time, New Gods #11, the final issue, didn’t wrap anything up in any real way. And because of that, this incredible first page didn’t just function as a doorway into the most creative thing I’d ever seen, it now functions as my first long lost love. When I say I loved the New Gods tales, I mean it. I devoured them. And to discover that there was no ending—no resolution—that it simply faded… was heart-breaking to me—like a friend that moved away without ever telling you or saying goodbye, they just one day didn’t live there anymore. I would later learn that it was also heart-breaking to Kirby himself.

Years would go by and I would revisit those comics once every two or three years and I would wonder about where Kirby would take them. And where they might have gone had he been able to continue. And that’s when this page meant something new again—it started to represent all the “what could have beens” in the world and in fiction. It taught me that creativity begets more creativity. I found this page, and the series that it ushered in to be a source of inspiration. If I ever felt like I wasn’t sure I was creative, I would pick up this book, and start with this page, and it would remind me that inspiration would come again and that the world was a creative and exciting place—and even that the next world would be exciting too.

As I eventually started to work in comics as an editor, I would learn a lot more about Kirby and his life. Especially since I was editing at Marvel and so much of what Marvel publishes is based on so much of Kirby’s work. But Marvel was my second experience working for a large company, and I was just figuring out what that meant on so many different levels. And I started researching and talking with creators about their careers. And that led to my understanding of Kirby’s career and his frustrations at Marvel that led to his departure from Marvel to go to DC Comics. When Kirby, frustrated, left Marvel and left the comic THOR about the Norse Gods, he started working ad DC and THIS PAGE was just about the first thing he did. He essentially ended his run on THOR and started something new and fresh in one splash page. You can’t look at that page and read that passage and think he wasn’t making a statement not just about his run on THOR, but about his run at Marvel—his relationship with Marvel.

And that’s yet another epiphany this page ushered in to me. It has represented wonder, heart-break, inspiration, and now the reality of the working world. The reality of corporate America. Now, my time at Marvel was NOTHING like Kirby’s. I had a great time at Marvel. But one thing we did appear (I don’t know how Kirby felt, I never met him before his passing in 1994) to have in common, was realizations about businesses—about the greed of corporate America and other similar ideas. And I knew I couldn’t work for a large corporation for too long before these types of things would get to me. But this isn’t unique to the place where Kirby worked or where I worked. It was true of any business that is publicly traded on the United States stock exchange (a whole other story for another time). And that realization, and then to see it reflected back at me from the past and from the most powerful creator whose work I’d ever seen—well, I felt a kinship to the work, if not to Kirby himself.

And it was around this same time that I was beginning to appreciate Kirby as an artist. As a young boy, I didn’t really like Kirby’s art itself. It was boxy and kind of weird and I just didn’t care for it. And depending on who inked him, sometimes his characters even looked more like robots than humans, to me. But as I was studying the art-form of sequential storytelling in comics, my mind was opened to why Kirby’s art is so revered. I finally was able to see what was underneath the boxes. The dynamics, the crystal clear storytelling, the excitement, and the sheer volume of story he could convey with a gesture or a single image. And again, I came back to this page. No other single splash page in comics has come close to conveying and representing and meaning as much as this page does to me.

I can’t express how this one page, it’s image and it’s messages can convey such excitement, such wonder, and such sadness to me. But it does, it does on the surface, just what the image shows and the text says. And then it does again because it brings me to all these different points in my life and these important revelations about myself and about the world that I had. And then again when I think about the exciting, whimsical, and sometimes sad career that Kirby himself had. It just hits me on so many levels and in so many ways all at once.

Had I never read New Gods #1, page 1, I think somehow I would have felt the lack of it in my life. And I suppose that’s an upside down way of saying that seeing this page, reading it, and coming back to it and all that it has represented to me (and perhaps to Kirby himself), that my life has been enriched by having read it and absorbed it. Or maybe it’s all just an upside down way of saying that I wish I had met Kirby so I could have said, “Thank you, Mister Kirby. I fall in love with your work for the first time, every time I read it. Good day”. 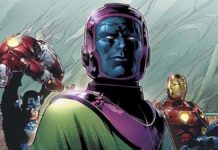 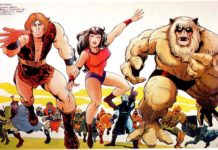 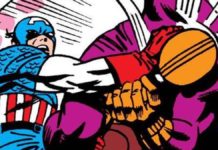 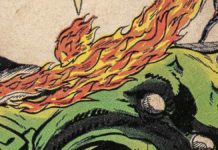 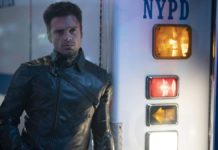