This Sunday I’m out with con Ken Parille, professor and comic book critic. He wrote on The Comics Journal, The Best American Comics Criticism, The Journal of Popular Culture, The Boston Review and, among the other things, he edited The Daniel Clowes Reader. When I think about “a great page,” I tend to think in terms of formal qualities: the way a cartoonist uses conventional comics elements (e.g., panels, balloons, text boxes, the grid) in an interesting way, creating a page that works as a design that’s attractive on its own (independent of the comic as a whole) yet whose design also connects to and develops the comic’s themes. This page from Leslie Stein’s “Holly Jolly Sabbath” is great for different reasons. It represents everything I like about her color comics. There’s a real looseness to the layout, to the ways that the “panels” (which are not really panels) blend into and overlap other aspects of the page. Something about her approach — which avoids the rigidity of conventional grid-based pages — seems perfect for autobiographical, diary-like comics, especially for those that, like this one, deal explicitly with memories and impressions. Everything about the page suggests confident and effortless cartooning, as if she’s sketching on the page and it all just works out right.

The expressions: the way she draws the mouth, almost sideway, not where it should be. Why do you think she does that?

I’ve seen other cartoonists take similar liberties when drawing faces and have it not work. The odd mouths just seem like part of her cartoony style, one in which facial features float around and change shape: it’s her take on the cartooning traditions of distortion and exaggeration. What she does with eyes is particularly interesting to me. In the first “panel” she uses wide circles, which look a little like the Christmas ornaments she draws to the left. Then she moves to small dots; then eyes become open “U”s; then, behind the smoke-like watercolor clouds, they grow into large green ovals as she’s fully caught up in some kind of teen-age ecstasy brought on by immersion in The Doors and in the lights of her candle alter. It’s all connected to the lyrics she’s singing, her solitude and romantic desire, and adolescence. The eyes, more than the character’s physical gestures and the plot, tell the emotional story about this memory. Her faces get stranger and more interesting the more I look at them. They have no boundaries; they just melt into characters’ bodies and merge into the page’s empty spaces — and noses seem to come and go at will. Her style merges cartoony cuteness with something odd. For instance, the main character, though often drawn in an endearing way, also has arms and feet that look a little like wire prosthetics. I’ve never seen anything quite like this mix of cuteness and a near-disturbing, hard-to-name aspect.

I’m wondering if all the changes in the colors of the words isn’t too much of a cacophony.

I think the lettering was the first thing that really attracted me to her color work. She’s an accomplished letter: I don’t often see this level of skill and inventiveness. There might be something a little child-like about the way she shifts colors, both from word to word and from letter to letter; the later approach has long been used in the multi-colored logos of children’s toys, games, and comics. Maybe the text coloring would be cacophonous if the lettering wasn’t so consistently legible (with well-designed letterforms and careful spacing) and if the colors didn’t harmonize so well. I always liked the way that, in some early 1960s Marvel comics, the word balloons were not just white; they could be yellow, orange, or pink, making already colorful comics even more colorful and pop-art-y. Marvel eventually abandoned this approach (was it too child-like for serious comics?), going with white word balloons, the industry standard. I like the fact that Stein’s comics avoid so many typical tactics yet remain easy to read; her style seems very singular.

Her approach to color may evoke childhood, but it also seems very sophisticated and artful to me. In these comics ‘color functions formally’: many objects are  pure color, without the black outlines found in most cartooning. Then there’s the paint drips and splatter, along with the superimposed ‘clouds’ of color and the  ways that areas of color transgress the implied boundaries of the ‘panels.’ I don’t know what her influences are, but, form-wise these pages remind me a little of work by  cartoonists like Anders Nilsen or even someone like Jules Feiffer.

What about this freeform of storytelling?

Though the comic lacks conventional panels in a grid layout, I find the narrative very easy to follow, reading in the familiar left-to-right, top-to-bottom method. The page, and the comic as a whole, has its own internal rhythm, I think, one that’s fundamentally different from the kind of dispersed “beats” you get with a series of discrete panels with gutters; this would segment the comic and perhaps make it too staccato for the kind of open, ambient effect she’s going for here, an effect amplified by stray color marks and paint drips, along with the palimpsest-like echoes on the second page, especially at the top.

She demonstrates to me that panels, gutters, and margins are not essential comics elements. Clarity and readability don’t depend on them. All this makes for an atypical and attractive approach to representing time across a page, as well. It did take me a few readings to get the obvious gag about the Christmas present, but that was on me, not the comic.

Thinking about a ‘good’ page, what do you think are the mistakes an artist can make to ruin a page from a storytelling point of view?

KP: Sometime an artist won’t understand what amount of background detail is necessary to keep characters and actions rooted in a setting: readers need  a certain amount of information in order to remain oriented. When an artist focuses too much on figures and the foreground, the environment might not seem  real or important, and the story element of character-place interaction will be lost. (Feiffer violates this all the time, with his background-less pages, but it  works for his kind of cartooning.) Stein often takes a minimalist approach to backgrounds, but it’s always clear where the characters are.     Some comics don’t pay careful attention to balloon placement: for example, one character’s answer to another character’s question might be placed where  most readers would read it first, before the balloon with the question. Stein’s color comics don’t use balloons, but the dialogue’s reading order is never in doubt.     Though people often think of clear storytelling in terms of an easy-to-process panel-to-panel flow, I think that bad lettering is a common impediment to narrative  clarity and cohesion. Computer lettering can be ok, but if the font isn’t carefully chosen, it might clash with the art and it won’t seem like the characters are really  ‘speaking’ the dialogue: the art’s line work and the text’s line will be too dissimilar. Though I prefer hand-lettering, bad hand-lettering can be worse than bad  computer lettering, ruining a comic that would otherwise be fine. Again, this is one reason I like Stein’s work. She pays attention to all the elements, with legible  yet unusual lettering, inventive form, clear narrative, attractive color, a well set-up joke, etc. 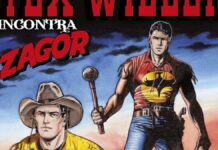 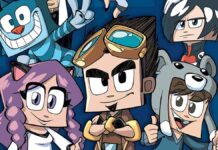 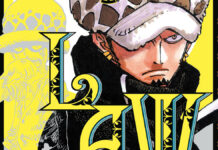 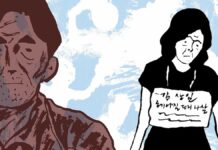 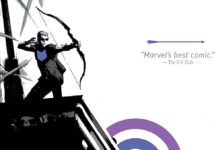 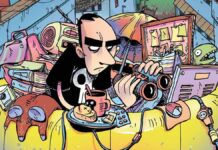