So this is a page from Slaine: The Sky Chariots written by Pat Mills and drawn by Mike McMahon.

Mike McMahon’s whole run on Slaine is amazing. This page is a nice example of what makes it so good. It’s like heavy metal Kirby. That guy’s missing tooth makes the whole page for me. Not sure why that is. It’s a book I look through once or twice a year and every time I look at it, it gets better and better.

I’ve been drawing comics as a full time job for the last 11 years, and I like to think that in that time I’ve gotten better at drawing and story telling. Some comics I admired 20 years ago, I look at now and think well that’s not really that great. But some work only gets better to me the better I get at drawing. The more I understand about drawing the more genius this work becomes to me.

What made you chose this page among all the others?

Well Its not an easy thing to choose, There were a bunch of pages that popped into my head when you asked me and I felt like a lot of younger comic readers might not be familiar with this work, and also I think a page that’s been around this long (1984)  and still holds up as well as this does and that would still immediately spring to mind, is probably worth talking about.

What clicks for you about the art?

That’s hard to answer. No one else really draws like Mike McMahon and even He didn’t really emulate this style again after his work on Slaine, it’s different to the way he drew Judge Dredd and different to every thing he’s done since. Its a really nice mix of simplicity and detail, Cartoonish and realistic. The way he used shadow was ahead of its time. I could be wrong but I think it looks like the work of someone really in love with what they do. That always shows through.

Why his use of shadow was ahead of its time for you?

I could be wrong. I’m probably wrong. I kind of work in isolation so I’m not used to actually articulating what I think about good comics. But anyway the way he separates black and white, and creates blocks of shadow is almost like Mignola, but with out being influenced by Mignola. A lot of artists working on similar material at the time didn’t use heavy shadows like this. But his approach was all his own and for a black and white magazine it really stood out above a lot of the other stuff.  He also broke up his areas of black in a really interesting way. I heard some where he drew it all with ballpoint pen and the scratchiness in the blacks is just a result of the tool he used, but that could be totally wrong.

Did you remember the first time you discover the book? How did you find out about it?

I first saw this artists work on Judge Dredd when I was about 6 years old. So his style just sought of stuck in my head. Years later as a teenager Simon Bisley’s Slaine came out, I was talking to an artist friend about it and he was saying Mike McMahon’s Slaine is as good if not better. So I bought the book and I liked it a lot, but as I say My appreciation of it has grown over time.

Why “no one else draws like Mike McMahon”, what are the main features of his art?

There’s a power and energy to his work that I can only compare to Kirby. And like Kirby there’s a sort of clunkyness to his drawing that somehow only contributes to making the art better.

As an artist what have you learned from McMahon?

A lot of lessons that overlap with lessons from all the artists I admire, to try and make things feel solid. The value of detail that at the very least feels like it is authentic. And weighing up the scale of each panel on a page, having a good mix of large figures and small figures and detail and empty space and finding the most important panel and giving that the most space on the page while having less important and less detailed panels smaller. All while trying to make the page flow from one panel to the next.  Trying to make something that is fun to look at. That’s in theory. Managing to achieve all that is a different story.

Given the same script, would you have drawn things differently? The page is very full and that figure is very “in your face”, I don’t know if you would have done the same.

It’s hard to say. And like any comic page we don’t know how much of it was suggested by the writer. Some it was dictated by the format, this story was originally published in installments in 2000ad so the first page of each installment was always designed to be as dynamic as possible. I don’t tend to do poster style images, for example that guy obviously isn’t in the same shot as the burning ships, (I should point out those are flying ships) that’s two separate beats in the same image. I don’t think like that. If I did an image like that I would have to add some ropes and boat details to establish that this guy is on another boat in the foreground. I don’t think that would look better though. That’s just how I would trip over myself on a page like this. 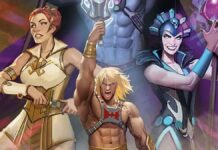 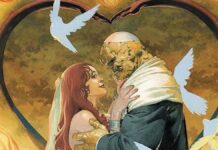 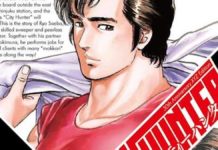